Why was this Kitchen Addition Remodeling Necessary? 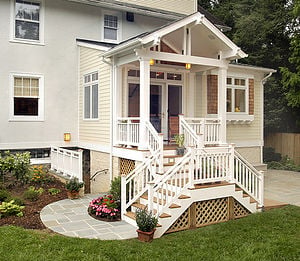 According to one of the homeowners, the old kitchen was ugly! A previous home remodeling at this Chevy Chase residence had made room for a breakfast area and powder room.  But that kitchen remodel had been poorly conceived.  The ceiling height in the addition was lower than that of the main house.  So there was an awkward shift in the middle of the kitchen.  Also, the floor plan created separate but un-related activity areas.  Though the space was larger—it still felt cramped.  Both owners just wanted to start from scratch. 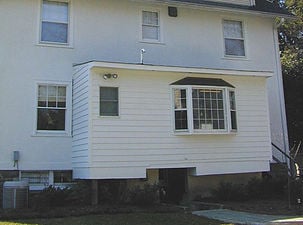 First, they wanted to address functional aspects of the kitchen:

Second, they wanted to address aesthetic aspects of the kitchen:

How were the functional needs of the kitchen addressed?

How were the aesthetic needs addressed?

What was the most significant obstacle encountered?

Architects had to engineer a support beam to span the back wall of the house (apprx 23 ft) but they had to avoid any intrusion into space from above.  They hid steel supports above the ceiling.

This kitchen addition with porch provided the function and aesthetics the homeowners were envisioning.

The Finished Project with Interior: