Interior Renovation: A Cure For the "Dysfunctional" Kitchen Layout 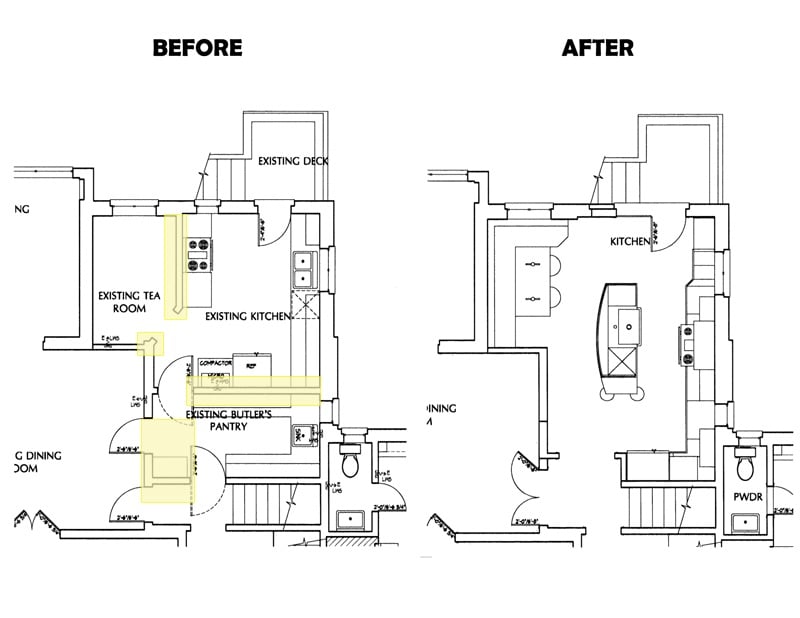 This happens a lot in metropolitan Washington, DC.  We encounter older homes with floor plans that the owners describe as "chopped up" or having "too many rooms and doors". The center hall colonial is legend for what is sometimes called the "dysfunctional layout".

In fact, the original colonial design made use of multiple rooms and many doors in order to regulate temperature and air flow. The "nuevo" colonials that came to populate DC neighborhoods like Cleveland Park and AU Park in the 1940's and 1950's mimicked traditional layout, but the introduction of modern heating and cooling systems made this floor plan functionally obsolete.

Current home remodeling agendas center around opening space, letting in light, and improving room-to-room flow.  This is particularly true with our interior renovation projects when kitchens and family rooms are involved.

Here are a couple of solutions our kitchen designers developed for clients in Cleveland Park and American University Park, DC.

This kitchen remodeling plan shows two interior walls removed to combine three rooms in this Cleveland Park DC residence. The result is one large kitchen layout with three clearly defined use areas: dining, food prep and storage. The kitchen designer merged two smaller rooms (a tea room and a butler's pantry) adjacent to the main kitchen.
The tea room area became a modern banquette, and the butler's pantry was absorbed into the kitchen's work space.  Two doorways between the kitchen dining room and main hall were merged to create a wider entry into the kitchen.  The interior renovation plan succeeded in opening up the room and defining function areas (seating, storage, food preparation).

The American University Park kitchen reconfiguration project shown below had to solve a similar problem. The separate kitchen and breakfast room were both too small for the family enjoy.

The kitchen designers developed a solution here that was rather daring.  As the before/after kitchen remodeling plans show, the designers combined the kitchen and breakfast room, blocked the center hall, and relocated a coat closet, allowing the clients to get a full run of cabinets and a large stove. The layout also blocked off a rear window to add storage cabinetry. They compensated for the lost natural light  by doubling the size of a window on the right hand side of the former breakfast room.

What happens in an interior renovation and reconfiguration project is often quite subtle, but effective.  Don't underestimate the power of small adjustments to make big changes.