Like many young couples who work and live downtown, Amy Feagles and Geoff Dietz looked to the inner ring suburbs when it was time to start a family. They purchased a house in Barnaby Woods, a quiet northwest DC neighborhood tucked between Rock Creek Park and Chevy Chase, Maryland.

This popular neighborhood has had several generations of homeowners who have moved in, renovated, and moved on. Since the original homes were small, many of them have additions that expand kitchen space and sometimes add a second floor bedroom and bathroom. With the home Amy and Geoff purchased, some renovations had been done in years past, but they were now dated and the kitchen and baths especially would need some renewed attention.

Amy and Geoff started the kitchen renovation with a baby on the way. And then COVID hit. So the challenge, aside from the normal challenges of living through a kitchen renovation, were compounded by two busy professionals working from home, expecting their first child in their first house, and trying to stay safe. To all of this, the courageous duo said, “Challenge accepted!”

As first time homeowners, Amy and Geoff knew there would be some work ahead in getting the house just the way they wanted it.

They took that first year to get acclimated to the home and brainstorm what they really wanted from the kitchen.

In starting the due diligence on finding the right partner to help them with this renovation, they saw Gilday signs in the neighborhood. They were two busy professionals, and Amy was pregnant with their first child.

“We didn’t have the bandwidth to project manage on the side,” Geoff says. “Gilday had a great reputation in the neighborhood, in terms of the quality of the work and how they manage everything for you.”

With ideas in mind, the next step was to see if those ideas could be turned into reality within the budget this young family had to work with. Designer Leslie Roosevelt listened well and made recommendations that were in tune with their tastes and style. 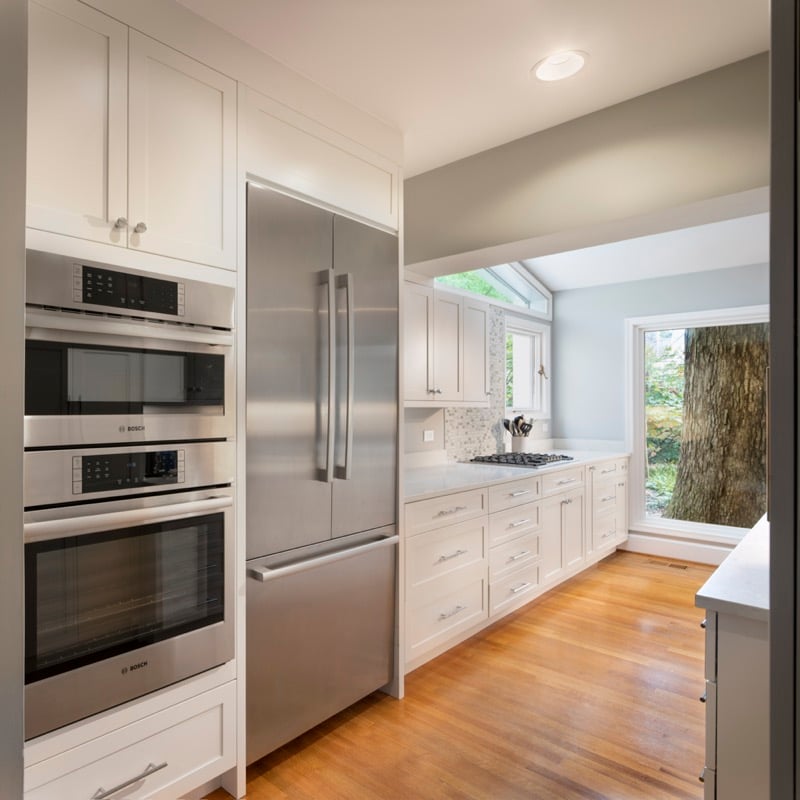 Why Would a Previously Remodeled Kitchen Need a Do Over?

The customers expressed these key requirements which were not being met by the existing kitchen configuration.

What were the problems? 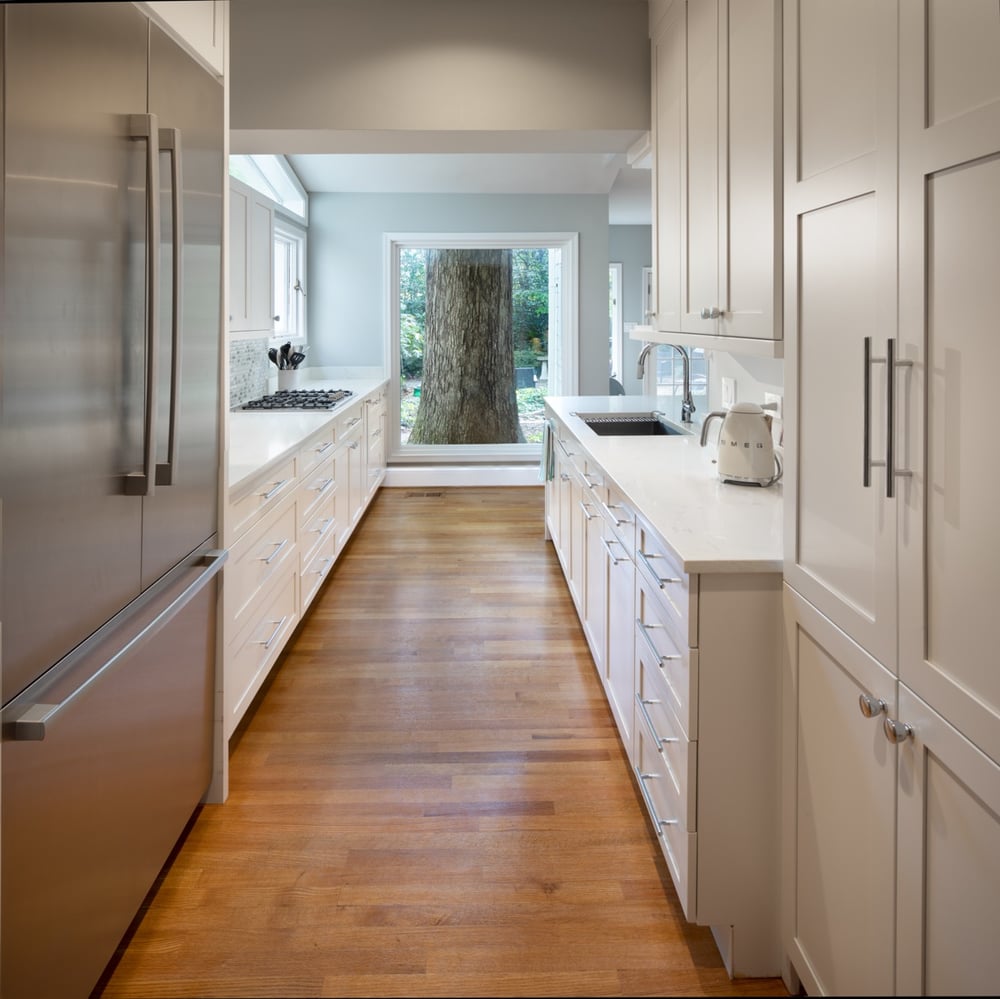 What was the solution?

It was clear immediately that a simple replacement kitchen would not come close to fulfilling the client’s wishes. To get the improved functionality they wanted required relocating the sink and some of the major appliances. This requirement always has a significant impact on the budget, so the benefit must be shown to outweigh the additional cost for the client. To help them make this decision, Kevin Gilday presented several conceptual designs to interest the clients, and then introduced them to his designer Leslie Roosevelt to further refine the drawings. Leslie developed a final plan that included a peninsula with seating and an option to relocate the sink to that area.

The result was more than Amy and Geoff had wished for. There were small details that made a big difference, like under cabinet lighting.

“We love how it lights up the countertops, and Leslie suggested an extra-large refrigerator, which has been a lifesaver with all baby food we need to store there.”

The redesign also called for a well-proportioned peninsula, which has proved to be a practical addition in several ways. As pandemic restrictions eased, Amy and Geoff were able to host family and friends. The peninsula became a focal point for the long-missed social interaction along with being the perfect place for food prep and service.

When Geoff and Amy were anticipating this amazing new kitchen back in 2019, they had no idea what would be in store for them as they kicked off the project in early 2020.

COVID hit, and the couple wondered if the project would just grind to a halt. While there was some disruption and slowdown, they were pleased with the precautions taken and the level of professionalism in how Gilday stayed the course while managing the challenges presented by the global pandemic.

Lead carpenter Shawn Cassidy walked them through the protocols being put in place, keeping them at ease with the extent of precautions as the renovation was in full swing.

The subcontractors and Shawn could work without direct contact with the clients due to a dedicated work entrance and vapor barrier between the work area and a fully functioning temporary kitchen that was placed in the family room. The temporary kitchen used all of the original appliances and part of the cabinetry and countertops which enabled Amy and Geoff to live comfortably during the renovation. Questions were largely resolved via text message, even as the couple worked from home while the renovation team worked one floor away from them. 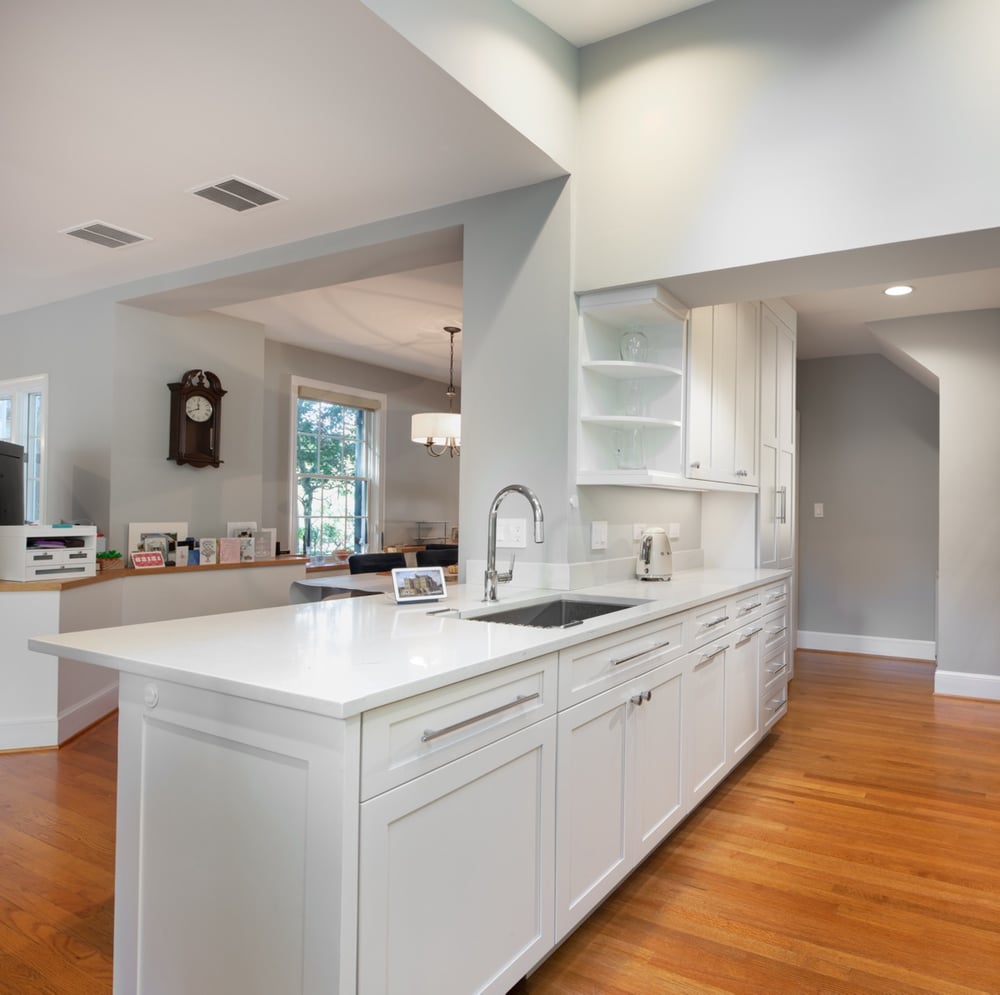 Getting it Done Right

Whenever you start demolition -- remove walls, take out plaster, lath, drywall, or subflooring -- there will be a few surprises. Sometimes they are big surprises. What you never want is to just cover up those problems with new drywall, flooring, etc. and pretend they don’t exist. That rarely ends well (although HGTV would need a new business model if they didn’t have those scary cover-ups to reveal!)

The Dietz/Feagles home was no exception. How you deal with these challenges makes all the difference, not just in the finished product, but in how the renovation will last over the long haul. The issue uncovered in this case was some fairly extensive wood rot.

“Shawn came to us and said, ‘We can’t move forward in good faith without managing this situation.’”

They found wood rot from a leak in the roof, and around a large kitchen window. This had been going on for years and the full extent of it wasn’t something easily detectable in a home inspection during the purchase process.

This meant added cost, but the cost would be much greater if the problems were left to continue over time. So rather than just picking new cabinets, flooring, and the fun finishing touches, there was framing and even new siding and roofing to add to the scope of work.

“We appreciated the straightforward communication and problem solving that the Gilday team brought to the table,” Geoff said. Taking bad news in stride and fixing the underlying problems is how renovations get done right.

There are all sorts of ways to renovate a home. But to have things done correctly, to be listened to along the way, and have your lives disrupted as little as possible - that is the ideal.

“In a post-pandemic, work from home world, renovation projects might create different kinds of disruptions than before,” says Geoff. “Having a team like the one at Gilday means you will have a real partner in managing all of those variables while the project is underway.”

If you are interested in renovations for your home and are curious about how to maximize the space you have to work with or improving a previously remodeled portion your home, contact Gilday today!