Design Build From A Designer's Point of View 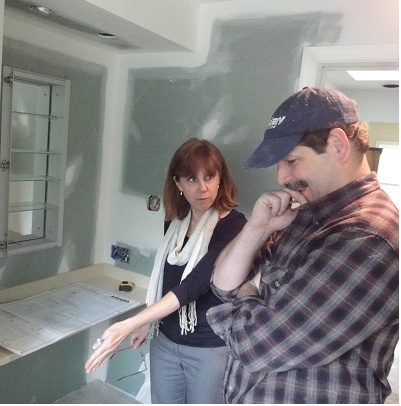 When talking about the design build approach to Washington DC home remodeling, we usually focus on benefits to the homeowner. Interior designer Leslie Roosevelt sees a benefit to the designer as well as the client.  Leslie has spent many years in residential remodeling—specifically in kitchen and bath design. This interview captures her insider’s perspective.
Interior designer Leslie Roosevelt reviews plans with project manager Pat Donly

What does design build mean to you?

In one word it would be personalization for the home-owner because, in a design build firm, we try to determine exactly what the home-owner wants and ensure it gets accomplished.  So what gets delivered in the end is the result of a personal journey that is mapped out just for that person, the client.  At least there’s a better chance it will go that way because everything is done under the same umbrella.  Everybody involved is on the same team.    So, if they need a space to achieve a certain purpose, it won’t get forgotten in the evolution of the job because it’s all the same company doing it. 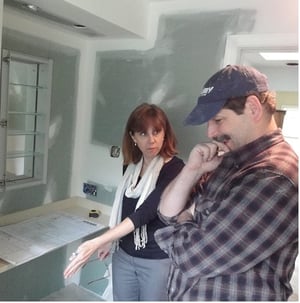 That’s the benefit to the homeowner—what about for the designer?

For me it’s control. What’s very common in an architectural firm is that the designer wants to achieve something but can’t know if it will actually happen later in the build.  You want to achieve that in the home-owner’s best interest—but how do you know for sure that plan or design comes to fruition once it’s passed on to a general contractor?  The GC may cut things because of budget or change certain features or specs they don’t see as important--when in reality these details are very important to the owner and the designer’s vision.  In our design build team, we don’t want to change anything unless there is a very good reason discussed by all parties.

Design build gives you more control over the project?

I have more control, sure because we’re all reading from the same script.  There is less chance of miscommunication because we all work for the same design build firm and we work on the projects together.

The end result for the home-owner is they get what they need aesthetically or functionally or both—which is the entire reason for putting yourself through a major kitchen remodeling or home renovation project, isn’t it?  Our commitment to design build means we are fully in control of design and all phases of production.  Things can’t get changed or missed by a third party who may not share or fully appreciate the vision.

Design build is a customized, personalized experience that stays true to the wishes of the person who is paying for it—the homeowner!