This is not the headline you want neighbors to be reading about you while you are laid up in a body cast.  In fact, this sort of  accident is pretty unlikely to happen. But...

We still have to wonder why some home remodelers would risk it.  See the photo below?  This is an example (not the first one we've seen) of knucklehead remodeling.  Our crew discovered it in the early stages of an extensive home remodeling in Cleveland Park, DC. We are standing below a second floor bath looking up.  What we see is that a previous bath remodeler cut out structural support under the bath tub to make room for new plumbing.  The mid section of the tub was propped up by one wimpy 2x4 (instead of a 2x12 joist) and the tub perimeter was teetering on stacked 2x4 blocks.  Really?  You call this framing?

The homeowner would never know.... what secrets lurk beneath the sub floor or behind the drywall

Our carpenters discovered these eccentricities when they removed the floor in preparation for remodeling the bathroom.  They responded by cutting out the ceiling below so they could get in there to install the correct structural support along with the new plumbing (see photo below). 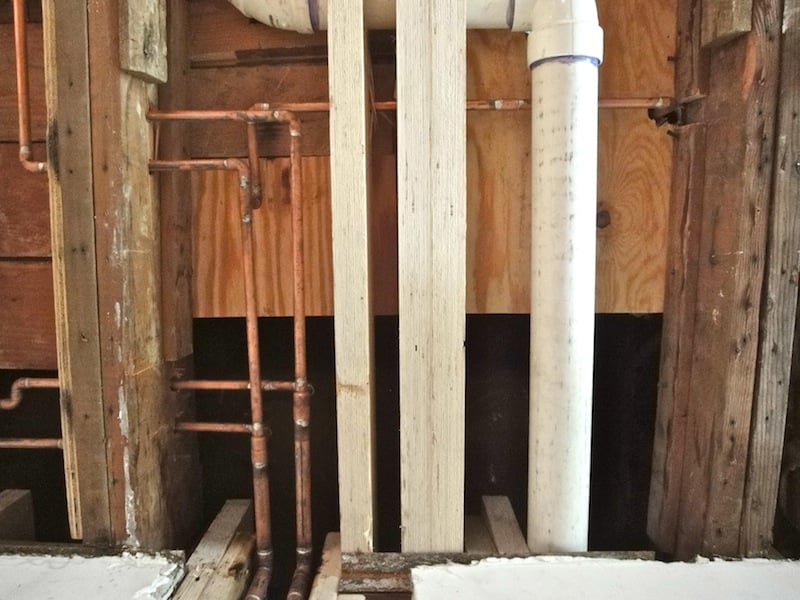 Rock solid structure will stand the test of time and a lot of punishment.  It ensures the sub floor won't shift and cause cracks in the tile floor.  The pipes won't wiggle loose and spring leaks at the joints.  Best of all, the likelihood of the tub dropping out from under you during your moment of zen is pretty much zero.